Farmington, ME — The members of the Farmington Fair track crew were the heroes of the day on Monday (Sept. 19) as the guys with drag trucks and shovels turned what could have been a complete washout into a productive day of harness racing at the western Maine agricultural exhibition.

Maine, like many parts of the nation, has been bereft of precipitation for long stretches this summer. But when the cold fronts start their fall descents, heavy rains can often follow, sometimes making a second “mud season” a surprising reality in the Pine Tree State.

Such was the case on Monday.

Nine races were hustled onto the track within the span of an hour and forty-five minutes (in order to beat the incoming heavy stuff), and while attendance was sparse, the program concluded without incident before the track was quickly resealed and put to bed for the night.

Driver Walter Case, Jr. was the master of the mud on Monday, as the career winner of over 11,000 dashes added two more to his imposing tally. 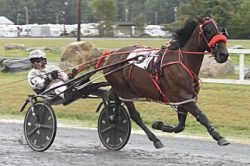 With rain having fallen throughout Maine all evening long and predicted to return around mid-afternoon on Tuesday, the Farmington track crew will once again have their work cut out for them. As of press time, the Tuesday program is still scheduled to go off at 2 p.m. (EDT).