Hightstown, NJ — During the winter and spring, the wife-and-husband team of Erica and Alek Chartrand kept quiet about how much they liked their 2-year-old male pacer Blue Hunt. As it turned out, there was no need to talk up the horse. Once he began racing, he made plenty of noise on his own.

Blue Hunt has three wins and a second in six starts this season for the couple and co-owner United Process Control. He will be heading to the New York Sire Stakes championship on Sept. 10 — and if all goes well the Grand Circuit meet at Lexington’s Red Mile and the Breeders Crown could follow — but next ahead is a start Thursday in the third round of the Kindergarten Classic Series at The Meadowlands.

“He was exciting training down,” said Erica, who handles the conditioning for the Chartrands’ 20-horse stable while Alek focuses on driving. “You sat behind him and you got chills. But you try not to get too excited because it’s such a long way to get them where they need to be. 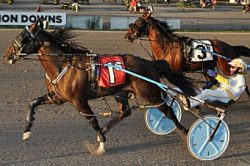 Blue Hunt is coming off a lifetime best 1:52.1 score in a NYSS race at Vernon Downs. Fotowon photo.

“We both did the Grand Circuit (working for other stables) for a long time. We’ve been around a lot of good horses. He just acts like a good horse. The ones that are constantly full of themselves and don’t have a care in the world, that’s him.”

Blue Hunt’s personality often reveals itself in mischievous ways around the stable.

“I love him to death, but he is always doing something,” Erica said with a laugh. “He’s like a really happy goofball. You have to laugh at him. He’s a character. But he’s got a lot of desire and likes to please. He loves being on the track every day; his ears are pointed toward the sky. He loves to be out there and race.”

Blue Hunt is a son of Huntsville out of All On Top Hanover. He was purchased in October for $40,000 at the Lexington Selected Yearling Sale.

“He was built really nice,” Erica said. “He looked like a racehorse from day one. The hobbles weren’t even necessary in the beginning, he could pace free legged as easy as anything. He was always an athlete. He did everything we asked and did it right. It was almost kind of easy for him.

“We were excited, but we hate telling anyone how excited we are. You don’t want to talk one up and then they come out and they’re not what you expected. Then he came out and everyone asked where we’d been hiding him. Now all our friends are watching him, and they are excited for us. And we’re excited too.”

All three of Blue Hunt’s wins have come in the New York Sire Stakes. His second-place finish was in the first leg of the Kindergarten at The Big M, where he missed by a nose in 1:50.1.

“He’s not really a half-mile specialist,” Erica said. “The only time he was bad for us was at Yonkers (where he went off stride and finished fourth-placed-fifth). We were trying to get as many points for the sire stakes on the big tracks so we could skip some of the (half-mile) tracks. That’s not really his thing. He belongs on the big track.”

Erica and Alek met about a dozen years ago while taking care of horses in Florida. They were married a couple years later and have a 4-year-old son, Elliot.

The couple has enjoyed success in recent seasons with pacer My Pal Joe and hope Blue Hunt can help bring them to the next level.

“We staked him to some things because we really liked him from the get-go,” Erica said. “We thought he deserved a shot at some of the bigger races at the end of the year. We’ve been working hard at having horses on the higher end. It’s taken us a little while but it’s starting to come along.”

Blue Hunt is the 3-1 second choice on the morning line in Thursday’s first of two $20,000 Kindergarten divisions for 2-year-old male pacers. He will start from post three with Tim Tetrick in the sulky. Downrightdelicious, who earlier this season won the MGM Springfield Stakes, is the 5-2 favorite.