Cumberland, ME — As advertised, the best sophomore trotters in the state of Maine have continued to lead the way at Fryeburg Fair, en route to the rich $240,000-plus Maine Breeders Stakes sophomore finals on Oct. 15 at Bangor. 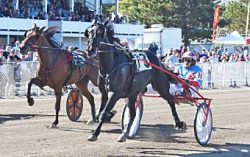 Katahdin Mark, the sophomore male point leader had no trouble adding another victory to his already impressive résumé, taking the $18,489 MSBS 3-year-old colt and gelding trot on Thursday (Oct. 6) at the ‘Blue Ribbon Classic’ Fryeburg Fair. The son of Noble Venture has found the winner’s circle eight times in 12 seasonal outings for trainer/driver Gary Hall and owners/breeders James Kelley Jr. and Betsey Kelley.

The outer flow started to materialize going into a 1:31.3 third panel with Chamorro (Heath Campbell/Valerie Grondin) trying to gain ground and catch the leaders. At the head of the stretch Chamorro had advanced dramatically and found himself within one length of Katahdin Mark, with Sammy’s Venture (Walter Case Jr./Mike Stevenson) rallying toward the wire as well.

Katahdin Mark held off the late chargers to score in 2:02.1 by a measured length. He paid $4.60 to win. It was a photo for place with Chamorro finishing second and Sammy’s Venture third.

On the early card the ultra-consistent Maplewood Slugger took a garden seat stroll around the Fryeburg oval and scored handily for driver Andy Harrington and trainer John Nason in the $18,286 MSBS 3-year-old filly trot.

Leaving from post two the daughter of Pembroke Slugger grabbed the lead in a healthy :30.4 opening quarter. With her stablemate Show No Tears parked out and moving to the half, Harrington relinquished the lead to driver John Nason into a 1:00.4 second panel. The next quarter remained unchanged as Pembroke Faye (Campbell/Grondin) was third going into that 1:31.1 third stanza.

Rounding the run and through the stretch Harrington had Maplewood Slugger out and rolling to score by 3-3/4 lengths in 2:01, a new lifetime best. It was the seventh win of the year for the homebred property of Maxine Hadlock. Pembroke Faye finished second; Show No Tears was third.

Two $18,000-plus MSBS divisions for 3-year-old filly pacers race on the regular Fryeburg card on Friday (Oct. 7), with the glamour boys (3CP) coming in with one division on Saturday (Oct. 8).