Cumberland, ME — The Polar Express Series make their second stop at Cumberland this weekend, with seven preliminary events totaling $36,000 in purses sprinkled throughout this weekend’s cards at the southern Maine oval.

Friday’s (Dec. 9) Polar Express Late Closing series No. 1 drew two full fields for the final preliminary leg of the event, with the $10,000 final slated for the following week. The first division, carded as race one, has Timbo Slice (driven by Andy Harrington) installed as the 5-2 morning line favorite, coming off an upset against this bunch last week. 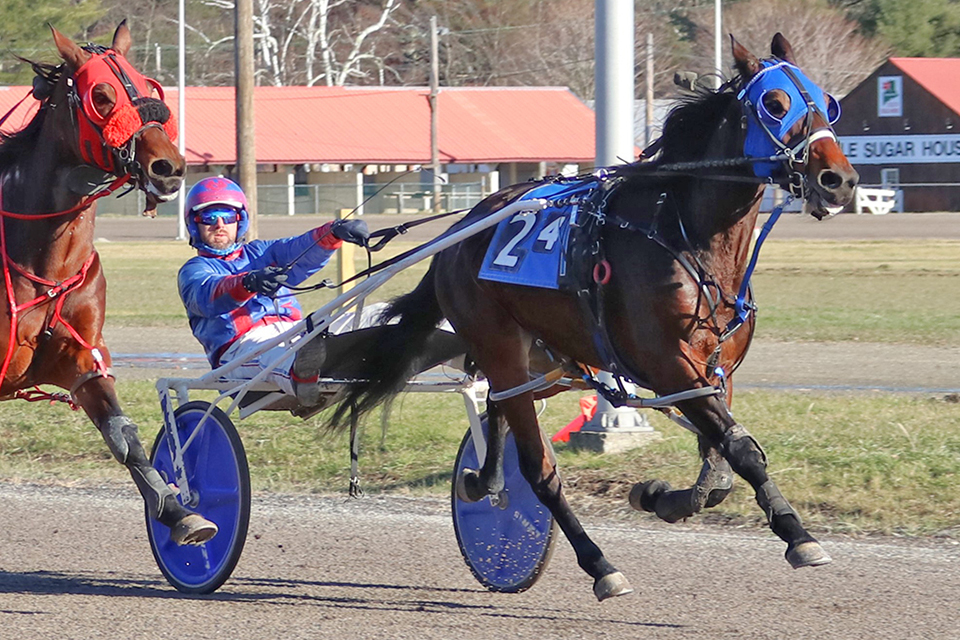 Timbo Slice looks to make it two in a row in the Polar Express series at Cumberland. Stephanie Gray photo.

The 3-year-old son of Sunshine Beach is owned and trained by Lester Dancer, who hails from the famed Dancer family of harness racing royalty. The second choice is Invictus Hanover (3-1, Kevin Switzer Jr.), who was second last week in the other division. JJ Maximus (7-2, Aaron Hall) gets some post relief and will look to get involved early.

The second $4,000 division of the series, carded as race three, sees last week’s other winner Cee Pee Panic (5-2, Nick Graffam) look to make it two in a row for trainer Benson Merill. Cash Crazy Express (3-1, Aaron Hall) has been consistent as of late, but Dancin Hill (4-1, Bruce Ranger) has drawn inside and gets a driver change.

Rojas Blue Chip (5-2, Mike Stevenson) gets the nod in the first division off his win last time out. The American Ideal mare is also trained by Stevenson and stables at the fairgrounds. Bet On Success (3-1, Bruce Ranger) is worth a look as he was a fast-closing third last week, beaten only a neck in the other division. Stormin Maverick (7-2, Walter Case Jr.) drew outside, but was also sharp in his last outing in the slop.

Every race all weekend long has a 50-cent trifecta, and the final race each day also features a 20-cent pentafecta.

The popular Au Revoir Retirement Showcase for 14-year-old Standardbreds is slated for Dec. 17 and boasts 18 total participants with one ‘Geriatric Pace’ event scheduled with a full field of soon-to-be retirees.