Lexington, KY — After the $80,000 opening leg of the Kentucky Sires Stakes Championship Series for 3-year-old filly pacers on Aug. 9 at The Red Mile was contested as a non-wagering affair with just three starters, the field has expanded to five for leg two, which will be raced on the card as race seven on Sunday (Aug. 21).

On paper the compact field arguably looks to be evenly-matched, with the role of 9-5 morning-line favorite going to Always Gonna B You, who won the first leg in 1:52.2. A modest $12,000 yearling purchase, Always Gonna B You brings a career bankroll of $268,520 into Sunday’s race.

“She’s not too bad. I’m such a good yearling picker,” trainer Joe Holloway said with a laugh. “She’s been a pleasant surprise that she’s been this good.” 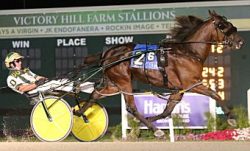 A modest $12,000 yearling purchase, Always Gonna B You brings a career bankroll of $268,520 into Sunday’s race. Dean Gillette Photography.

Bred by Joe Hurley’s Roll The Dice Stable, Always Gonna B You was purchased by Marty Granoff’s Val D’Or Farms as a yearling, with Hurley buying back in. A daughter of the Indiana-based stallion Always A Virgin out of the Somebeachsomewhere mare Passing Fancy — a $115,000 yearling purchase who had a non-descript five-start career for trainer Holloway — Always Gonna B You has been shuffling between the barns of Holloway and Hoosier State-based Jeff Cullipher so she can compete in the sires stakes programs of both states.

A winner of three of 14 starts last year at two, Always Gonna B You has four wins and four seconds in eight starts this year. She has two wins and two seconds in four Indiana Sires Stakes legs at Harrah’s Hoosier Park, including a career-best 1:49.4 on May 30.

“She has those Indiana stakes and it’s tough to have just one horse out there, so I started her and shipped her to Jeff,” explained Holloway.

Holloway said Always Gonna B You showed talent from the get-go.

“She trained down well, but you never know,” he said. “She did OK in the Indiana stakes last year but she didn’t do well at the end of the year. But she came back and trained back better than last year.”

Always Gonna B You’s program lines show early speed and then homestretch speed, with a couple of :25-and-change final quarters on her lines.

“Like most, she likes to go forward and then sit and stalk,” said Holloway. “She has been consistent and doing well.”

Holloway will turn the lines over to driver Yannick Gingras for Sunday’s race, with the pair leaving from post one. Also in the field is Dont Fence Me In (post two, 7-2, Andy McCarthy), who won last year’s Championship Series final for 2-year-old filly pacers, and Boudoir Hanover (post five, 2-1, Todd McCarthy), who won the Nadia Lobell at Harrah’s Hoosier Park early last month in a career-best 1:48.3.

“Both programs are so good,” said Holloway. “I’ll race her in Kentucky for the last two legs before the final and since she’s not a great shipper I won’t send her to Hoosier for a few weeks. I’ll probably grab only one more Indiana leg.”