Delaware, OH — Atlanta went to the front and never looked back as she kicked off her farewell tour by winning Thursday’s $115,500 Miss Versatility Series championship for older female trotters by 1-1/4 lengths over When Dovescry in 1:53.2 at the Delaware County Fairgrounds. Refined finished third. 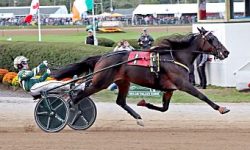 Atlanta, who will be retired at the end of the season, and driver Yannick Gingras set fractions of :28.4, :58.1, and 1:26.3 as she was never threatened. She sprinted home with a :26.4 final quarter-mile to make her first-and-only appearance at the fair a winning one.

“There was never a doubt in my mind she could get around here,” Gingras said, referring to the half-mile track at Delaware. “She’s very good gaited.

“It’s tough when you get to the end of a horse’s career like this. Like today, it’s not about the money, you want to put (the win) on her resume. Every race now, you want to try to put one more big one on her resume because she deserves it. She’s been great for five or six years, and we’re sure going to miss her.”

Seven-year-old Atlanta is history’s co-fastest female trotter, with a time of 1:49, and the fourth-richest female trotter of all time with earnings of $3.35 million. In 2018, she became the first filly in 22 years to beat the boys in the Hambletonian and was named the Dan Patch Award Trotter of the Year. She added a Dan Patch Award plus an O’Brien Award the following year as the top trotting mare in the U.S. and Canada.

Atlanta is trained by Ron Burke for the partnership of Crawford Farms Racing, Brad Grant and Howard Taylor. The daughter of Chapter Seven-Hemi Blue Chip was bred by Order By Stable AB.

“She’s just a special horse,” Taylor said. “Every race she puts out, she gives her best. She’s been a miracle.”

Atlanta will head to Crawford Farms for her next career as a broodmare.

“She’s going to be a mom soon, and I think that’s going to be her next accomplishment,” Michelle Crawford said. “She’s just the most amazing horse I’ve ever owned.”

Sent off as the even-money favorite, Atlanta paid $4.20 to win.