Lexington, KY — I woke up this morning singing “The lion sleeps tonight.” No, nothing to do with racing, but something that country star Keith Urban put not only in my head but also probably everybody else at a capacity crowd at Rupp Arena last night. Keith said we all had a guilty pleasure song and then he led the crowd into singing about a lion sleeping.

I stepped away from racing last night so I could attend the Keith Urban concert, with Tyler Hubbard, half of Florida Georgia Line, one of the opening acts. I went with my local great friend Chasity and after eating dinner at The Goose we walked over to Rupp where we had seats in the fifth row at the left side of the stage. My co-worker Wendy Ross texted me that she was also at Rupp, joined by Heather and Scarlett Wilder and Barbara Bongiorno. Wendy said Michelle Crawford surprised them with tickets to the concert. Ironically, they were sitting in the section exactly across from us on the other side of the stage.

While I was off elsewhere, the Lexington Selected Yearling Sale continued on its record-setting ways on Thursday, as gross sales have topped more than $60 million for the first time ever. And there’s still a Friday night session loaded with Indiana and Ohio-breds to go!

As for my sponsors, Steve and Cindy Stewart’s Hunterton Sales Agency, they’ve now sold 78 for $9.153 million, second on the list behind only Preferred Equine. Hunterton’s average price is a nice $117,346. I’ll be checking in with Steve and Cindy soon to get a personal report.

When I arrived at The Red Mile this glorious Friday morning — not a cloud in the sky and 58 degrees — the first person I saw at The Deck was Mike Vandeheede, and he immediately asked how the concert was since he saw my Facebook postings. I told him I had a great time and it was a great show. I then saw Jessica Otten who, like me, is a former Michigander.

Jessica told me she was there to interview connections of the retiring Atlanta and world champion Bulldog Hanover for the upcoming Fox Sports Breeders Crown show from Woodbine Mohawk Park. Jessica said she was going to compare Bulldog Hanover to Flightline, arguably the leading candidate for Thoroughbred Horse of the Year honors. Jessica and I also reminisced on the good ole Michigan days. It’s great to see her doing so well at The Meadowlands — and now a big part of the Fox Sports presentation of harness racing — and she truly deserved the Lew Barasch Breakthrough Award last year from the U.S. Harness Writers Association.

One thing great during The Red Mile meet is that I get a chance to catch up with people I haven’t seen, like Jessica. 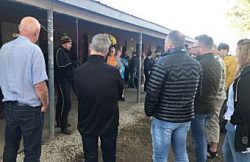 Per Engblom was conversing in his native Swedish to a large group of people from Sweden who were at his barn. Gordon Waterstone photo.

Another thing I like is that there are many foreigners in the barn area. As I noted in earlier columns, there is a large group here from France that has done some touring, and a couple days ago — as you can see in today’s photo — I saw Per Engblom conversing in his native Swedish to a large group of people from Sweden who were at his barn.

I started to make my way through the barn area — a bit hungry since the breakfast tables were bare — and said hello to Nancy Takter and Josert Fonseca. I looked over and saw trainers Ray Schnittker and Noel Daley in a conversation by Noel’s barn. I then headed over to see Brent MacGrath and Beach Glass, who underwent surgery for an trapped epiglottis on Sunday morning at Rood & Riddle here in Lexington.

Meadowlands Pace champ Beach Glass was wearing a nebulizer as he recovered from the surgery that Brent told me went like a piece of cake. Beach Glass faded to fourth after leading into the stretch in his Bluegrass split last Saturday and Brent told me that down the stretch he knew something was wrong. So too did driver Yannick Gingras, who immediately told that to Brent.

Brent said he was thankful that trainer Domenico Cecere and Dr. Andy Roberts were nearby and that he was especially thankful that if this was to occur that it happened in Lexington and near Rood & Riddle.

“He seems sharp and is feeling good,” Brent told me. “Luckily it happened here and I was able to take him immediately to Rood & Riddle.”

Brent said he and his wife Rhonda — who was also at the barn this morning — will head back to Canada on Monday, with eyes on the upcoming Breeders Crown still hopefully on the schedule. Brent is keeping his fingers crossed that Beach Glass will be able to compete in the race at Woodbine Mohawk Park. Breeders Crown elims are scheduled for Oct. 21-22.

“He’s as good now as you could expect but we’ll give him the time he needs,” said Brent, adding that plans call for Beach Glass to return to the racetrack in 2023 as a 4-year-old.

I asked Brent if he planned on buying a yearling or two in Lexington and he said probably not, but that he sold a Downbytheseaside half-sister to Beach Glass on opening night of the yearling sale for $420,000.

I decided to head back out and as I walked by Dewayne Minor’s barn where Bulldog Hanover is stationed, I saw Jessica and her crew setting up shop to interview trainer Jack Darling.

Noel Daley came by and he said he was heading back to the hotel to get his son Max. I asked how old Max was now and could hardly believe when he said he was 9-1/2 years old. Noel said he had Max at the yearling sale yesterday afternoon and that he bid on one horse and was successful. Way to go Max!

After being off since last Saturday’s card, racing gets back underway Friday afternoon at 1 p.m. at The Red Mile, with Keeneland opening up its fall meet at the same time. As if traffic isn’t bad enough in this town, with Keeneland now open and a sold-out Kentucky home football game Saturday night against South Carolina, it’ll be tough to get around town.

Friday’s predicted high is 66 degrees, with Saturday only expected to reach 60. If you’re going to the football game — some have told me they have tickets — it’ll be chilly in the mid-40s range. Sunday’s high is expected to reach 63.

Hopefully, hopefully, lets keep our fingers crossed, and our toes crossed, that we see a memorable Kentucky Futurity race card that will be capped off by Bulldog Hanover racing in the Allerage. He’s won 11 straight now going for a dozen.

That reminds me, while I personally congratulated Jack Darling on his recently-announced election to the Canadian Horse Racing Hall of Fame, I need to also congratulate announcer Frank Salive as well. I’ve known Frank for many, many years, dating back to when he called the races at Windsor Raceway and he’d pop in to say hello every so often at Hazel Park. And ironically, also elected to the Canadian Hall is Shadow Play, the sire of Bulldog Hanover.

I needed to fill my gas tank yesterday and I can report that the $3.26 station I’ve been to was up to $3.46. I wasn’t happy, even with the 60-cent discount I received via my Kroger card. But that puts the station on par with pretty much every other station in the area.

Have a great day and I’ll be back with y’all Saturday. And please don’t wake that sleeping lion!