Dover, DE — The $250,000 Progress Pace, held Wednesday (Nov. 23) at Bally’s Dover, shaped up to be a “showdown at the speedway” between arch rivals Pebble Beach and Beach Glass. And while Pebble Beach won the battle for the early lead, blistering fractions took their toll and Beach Glass emerged victorious in the final 150 yards of the event for 3-year-old pacers.

Beach Glass and Yannick Gingras threw down the gauntlet early from post seven, forcing Pebble Beach (driven by Todd McCarthy) through a vicious :25.1 first quarter before easing into the pocket. Pebble Beach kept the pace up through middle splits of :52.4 and 1:20.3, but the pace took its toll on the 17-time winner shortly after he cornered for home. Beach Glass, who edged out of the pocket a quarter mile from home, lifted to the lead with 150 yards to go, and was driven clear to win by two lengths in 1:48.4. 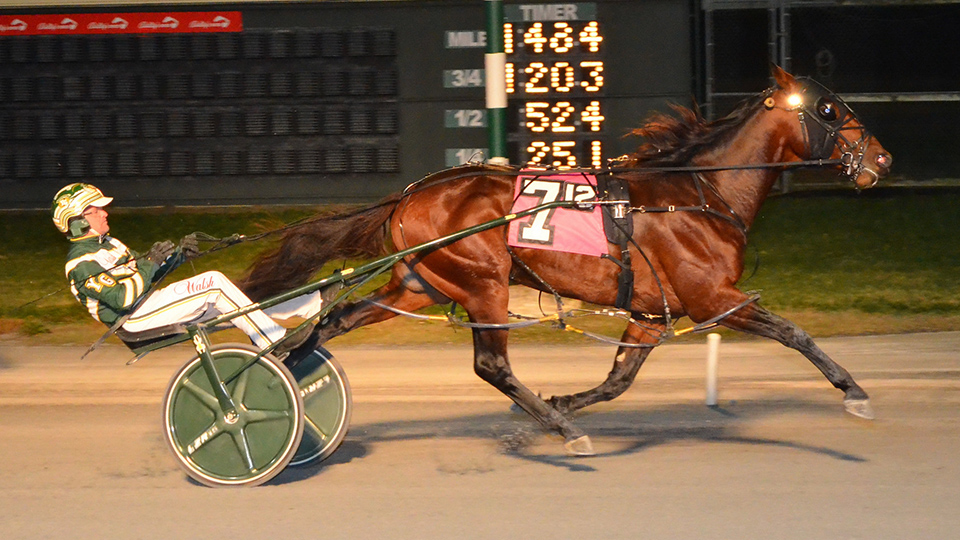 Beach Glass won the most recent meeting with Pebble Beach, striking from the pocket for a 1:48.4 triumph in the Progress Pace. Fotowon photo.

By way of his 12th win from 18 career starts, Beach Glass increased his earnings to $1,100,544 for trainer Brent MacGrath and owner-breeder Schooner II Stable. The son of Somebeachsomewhere paid $4.60 to win as the 6-5 second choice.