Grove City, OH — The second leg of the Ohio Sires Stakes wrapped up Saturday evening (June 25) at Eldorado Scioto Downs with two new winners in the three-year-old colt trotting division.  Chulo and Longshot each set lifetime marks with their wins in the $55,000 races. 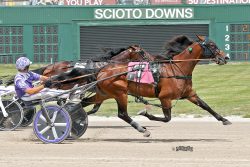 After being parked the mile, Chulo dug in late to win his division of the $55,000 Ohio Sires Stakes for 3-year-old Colt and Gelding trotters. Conrad Photo.

In the first division, Rose Run Xtra (Chris Page) raced to the early lead, but gave way to Guido Di (Brady Brown) at the first quarter pole in :28.2

Guido Di continued to lead at the half in :58 as Brett Miller pulled Chulo and started to make his move down the back stretch.

As the two hit the three-quarter pole together in 1:26, Chulo started to take control at the top of the stretch.  He fought off a late charge by Rose Run Xtra to hang on and win by three-quarters of a length in 1:54.  The Mighty Hill (Trevor Smith) was third

Chulo is trained by Per Engblom and owned by Engblom Stables and Chulo Partners.  The win was his first of the year and third lifetime.  He has now earned $37,725 this year.

In the second division, Doo Wop Kid (Tony Hall) was looking for his second win in Sires Stakes action this year.  He raced to the early lead, but quickly gave way to Up Blueberry Hill (Chris Page) at the quarter pole in :28.3.

Chris Lems wasted no time as he wanted the front end, taking the 3-5 favorite, Longshot to the lead as the field headed down the front straight.  Longshot led the field past the half in :56.4.

As the field headed to the three-quarter pole, Longshot maintained the lead as Up Blueberry Hill with Chris Page and Bamboo and Dan Noble started to challenge.

The two tried to rally down the stretch, but Longshot held on to win by a length and a quarter in 1:54.2.

The win was the third of the year in six starts for the son of Long Tom.  Longshot raised his earnings this year to $47,900.

Longshot is trained by Scott Cox and owned by Wayne Mast Jr. and Callam Racing.

Longshot paid $3.40 to win.  Up Blueberry Hill was second and Bamboo was third.