Farmington, ME — Driver Ron Cushing continues to push the pedal to the metal at the Farmington Fair this week, winning four races over the course of the first three sessions of racing while in the process, claiming victory in the three fastest splits of the young western Maine meet.

After delivering a pair of zippy scores for trainer Dakota Jackson over a lightning quick strip on opening day of the Franklin County agricultural exhibition (Sports Teen in 1:57.2 and Cold Decked in 1:57.3), Cushing showed off some sizzle with one from his own roster, authoring a 1:58.2 epic behind Newsy N (Bettor’s Delight) on Tuesday (Sept. 20) in a $7,500 distaff open event. 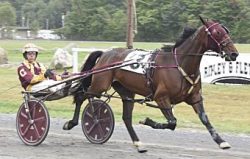 Over a quickly improving surface rated good by the judges following 36 hours of substantial rain, Cushing left intently from the gate with the recent import from down under, who was making only her second stateside appearance.

Parked to the quarter by a persistent Oceanview Echo (Walter Case, Jr.), Newsy N quickly dispatched her early rival and whizzed past the first marker timed in a brisk :28. With only a furlong of rest, Newsy N was again pressed on the point as Go Sandy Go (Kevin Switzer Jr.) pulled well before the half, charging to engage the pacesetter while the tandem matched strides to the three-quarter pole timed in 1:28.1.

Pestered all the way around the final turn, Cushing appeared to say ‘enough of this foolishness,’ asking Newsy N for just a little bit more, as the gritty 5-year-old mare dug down gamely for the stretch run, extending out to a 1-1/2 length margin at the wire. Pembroke Ali (Heath Campbell) rallied from far back to secure the runner-up placing while Go Sandy Go battled for the show.

The win was the tenth lifetime but first stateside victory for the Heidi Gibbs trainee who is owned in partnership by Ron Cushing and Kevin Sywyk. The 1:58.2 clocking represents a new North American time standard for the up-and-coming mare.