Melbourne, AUS – Dancinginthedark M (2, 1:52.2; 3, 1:49.3), the fastest 2-year-old trotter to come to Australia and the fourth fastest trotting stallion of all-time, is slated to stand his first season at Aldebaran Park in Nagambie (Vic.).

Bred and raced by the Swedish global breeding giant Menhammar Stuteri AB, Dancinginthedark M proved himself a young trotter of great ability from the time he first hit the racetrack. He won his career debut as a 2-year-old in an Arden Downs division at The Meadows in 1:55.3. 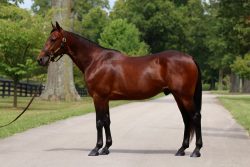 Dancinginthedark M, who has a career mark of 1:49.3, will arrive in Australia in October to stand stud. Aldebaran Park Photo

As a 3-year-old Dancinginthedark M won several races on the Grand Circuit at The Meadowlands including the $135,500 Stanley Dancer Memorial in 1:50.1 and the Reynolds Memorial in 1:51.4 on a “sloppy” track.

He took his record of 1:49.3 at three in 2021, winning the $250,000 Kentucky Championship Series final, in which he clocked a final quarter in a blistering :26.4 to defeat the reigning 2-year-old colt trotter of the year Venerate.

Dancinginthedark M’s 1:49.3 win tied him as the fastest male trotter in the world in 2021, a mark that also places him in a tie as the eighth fastest trotter of all-time.

In all, Dancinginthedark M won eight races with four placings from 23 starts for $362,204.

Champion trainer Marcus Melander, who prepared Dancinginthedark M throughout his career, said: “He’s really a super horse. He’s very strong – he can go really fast, but what makes him so great is that he can keep that speed a long, long time.”

Dancinginthedark M, a bay horse foaled in 2018, is the first son of the mighty Readly Express Swe (1:50.9), the winner of 12 Group 1’s and dual Swedish Horse of the Year, to be imported to this country.

Readly Express is a son of the dual Prix d’Amerique winner Ready Cash, the leading sire in France for the last six years and sire of Europe’s first 1:50 trotter Bold Eagle.

On his dam’s side, Dancingintherdark M belongs to the same maternal family as Game Pride, a leading sire and broodmare sire in both New Zealand and Australia for many years.

His dam, Leila, who left five winners including three in 1:56, was by Andover Hall from CR Royal Jeannie (1:59), by Royal Troubador, a Breeders Crown champion from Grand Performance, by the Hambletonian winner Bonefish.

There is not a drop of Valley Victory blood in his pedigree, making him an ideal outcross to mares boasting Muscles Yankee blood and the many daughters of Majestic Son, Sundon, Armbro Invasion, Pegasus Spur, Dream Vacation and Earl.

“Aldebaran Park are excited to be able to offer to Australian breeders this outstanding stallion who has shown on track in the US that he is ‘one for the ages’,” Aldebaran Park principal Duncan McPherson OAM said.

“Partnering with Menhammar Stuteri AB, initially with the importation of Aldebaran Teal Swe in foal to their stallion Who’s Who, the resultant filly foal and now the arrival of Dancinginthedark M who will be here until the end of the 2025 stud season, shows that Australian trotting is recognised as a market of growth and potential, as we strive continually to internationalise and globalise the sport.”

Dancinginthedark M’s introductory service fee is A$4,400 including GST.

He is due to arrive at Aldebaran Park at the end of October to commence stud duties.