Harrisburg, PA — Paula and Jeff Snyder were not the only ones who liked Date Night Hanover, but they were the ones successful in bringing her home. The daughter of Chapter Seven-Don’t Wait Up sold to the Snyders for $600,000 on Monday to lead the opening session of the Standardbred Horse Sale. 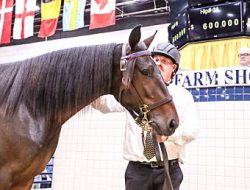 The trotting filly is a half-sister to Grand Circuit winner Delayed Hanover. Her family also includes Hambletonian champion Trixton as well as the dams of Dan Patch Award-winner Venerate and recent Grand Circuit winners such as Periculum, Raised By Lindy, and International Man.

“She was my wife’s favorite horse in the sale, and we looked at a number of them,” Jeff Snyder said. “She’s a Chapter Seven, who had a great year this year, and we just thought she was the best horse in the sale. It’s as simple as that. The family is wonderful, there are a lot of recognizable names.

“She was a little more than we expected her to go for, but not too much more. She was well touted. Many people said she was the best filly in the sale, for sure. She checked all the boxes. We’re excited.” 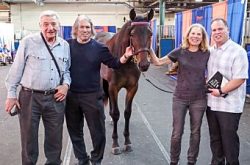 Added Paula Snyder, “There is just something about her. She is very classy. We made a connection. I told Jeff that if he was going to buy anything, that’s the one. I know everybody liked her, but she looked special. Now, we’ll hope for the best.”

Marcus Melander will train Date Night Hanover, who was bred and consigned by Hanover Shoe Farms. The filly is New York and Kentucky eligible.

A total of 165 yearlings sold Monday at the Pennsylvania State Farm Show Complex for a session-record gross of $19.7 million, besting the $19.2 million in 2019 when 169 horses passed through the auction ring.

“We’re up 11.2 percent in gross over last year,” said Dale Welk, the Standardbred Horse Sales Company president and director of operations. “We’re down about 8 percent in average due to selling 29 more yearlings than we did last year.

“I was a little nervous at first because (the sale) kind of started off slow, which surprised me; there were some yearlings bought there that I think guys are going to be really happy with. But once it got going, the big horses sold real big. I was very happy with the outcome.

“And we’ve got probably 70 to 80 horses tomorrow that could have been sold today, so hopefully we’re going to have another great session.”

Three horses sold for at least $500,000 on Monday, with filly trotter Tandem Hanover being No. 2 on the best-sellers list. The daughter of Walner-Think Twice went for $510,000 to Andrew Harris. 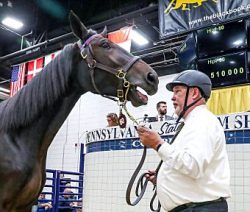 Filly trotter Tandem Hanover was No. 2 on the best-sellers list and went for $510,000 to Andrew Harris. USTA/Mark Hall photo.

Tandem Hanover is a full sister to Temporal Hanover, a multiple Grand Circuit winner this season, out of the family of 2006 Horse of the Year Glidemaster. The New Jersey-eligible filly was bred and consigned by Hanover Shoe Farms.

“The page is awesome, the filly was amazing, the video was awesome; I just felt more confident with buying a filly like this with her pedigree,” Harris said. “She’s a big, racy filly with a great head. She’s gorgeous. She looks like she floats right along. There wasn’t much to knock. We took a shot, and let’s hope it works out.

“She is going to have residual value as a broodmare, so if I’m going to fire on one, I felt confident doing it with one of these fillies.”

Owners Bill Pollock and Bruce Areman, who recently joined Harris in purchasing 4-year-old pacing stallion Abuckabett Hanover for $534,000, are on board with Tandem Hanover. 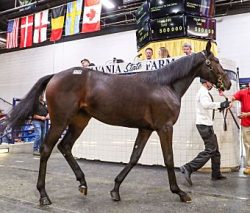 Greenspring, a daughter of Greenshoe-Ilia, is a half-sister to Grand Circuit winners In Range and Long Tom as well as Tight Lines, the earner of more than $625,000. She was bred by Windsong Stable and consigned by Concord Stud Farm. She is Pennsylvania eligible.

“I liked her (pedigree) page, and she is a beautiful filly,” Determination trainer Luc Blais said. “There is a lot to like about her.”

Pennteller Hanover, a son of Chapter Seven-Possess The Magic, is a half-brother to Grand Circuit winner Master Of Law and his extended family includes multiple Dan Patch Award-winner Manchego. He was bred and consigned by Hanover Shoe Farms and is New York and Kentucky eligible. 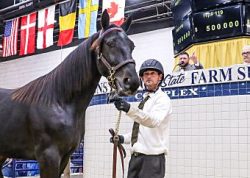 “He is a very nice-looking horse, and I like that he is a Chapter Seven,” Blais said. “He is from a good family too.”

“It was a little stressful, but it’s a good feeling,” Blais said about Monday’s outcome.

The highest-priced pacer during the first session was filly Time Out Hanover, who sold for $325,000 to Tony Alagna as agent.

The daughter of Stay Hungry-Time Saver Hanover is a half-sister to Tickertape Hanover, a Grand Circuit winner this year who was fourth in the Metro Pace. Her family also includes stakes winner Took Hanover as well as Trim Hanover, the dam of Dan Patch Award-winner American Jewel and millionaire Luck Be Withyou.

Hanover Shoe Farms bred and consigned Time Out Hanover, who is Pennsylvania eligible.

The second session of the yearling portion of the Standardbred Horse Sale begins at 10 a.m. Tuesday and features hip numbers 171 through 523. The yearling sale concludes Wednesday with hip numbers 525 through 938.