Farmington, ME — Driver David Ingraham held the hot hand during the first session of racing at the Farmington Fair on Sunday (Sept. 18) as the first of Maine’s “Big Three” fall agricultural exhibitions got underway for its 181st season.

The Ingraham rampage began early in the program as the career winner of over 7,700 dashes hustled Ugotaearnyrstripes (Deuce Seelster-Armbro BMW) smartly off the car in a $17,834 Maine Sire Stakes split for 3-year-old pacing colts and geldings. Trained by Stephen La Casse for owner Edward Blash, the sophomore stakes star earned his eighth career victory lap timed in a lifetime best 1:58. 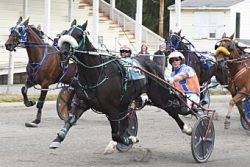 Ingraham next mastered the midway with an entry from the family roster as the Kelly Case owned and trained Skyful Of Lighters (Bettor’s Delight) lit the board at 4-1 odds while keying a hefty $216.80 return on a $2 exacta wager. The 1:59.3 win was the 34th lifetime for the 11-year-old veteran who now stands just north of $12,000 removed from joining the half-millionaire club.

Dave’s delightful day concluded with a win behind one of the most regally bred combatants on the state of Maine circuit as Pembroke Scorpio scored his 49th career victory in 1:59.3. The 11-year-old son of Camluck, out of the Abercrombie mare Stylish Smile, proved that old-school bloodlines can still bring home the bacon as he delivered yet another trophy cooler to proud owner/trainer Patty Sumner.