Farmington, ME — The Farmington, Maine Agricultural Fair is in full swing and harness racing is the center of attention at the historic 181st annual event. Situated in Franklin County (Maine), Farmington has a whopping 47 properties or districts listed on the National Registry of Historic Places.

Live harness racing action was contested at Farmington on Sunday (Sept. 18) and Monday (Sept. 19) with several divisions of the Maine Breeders Stakes competing under sunny skies with the festive scenery of the fair midway in the background.

Several of Maine’s finest from the 3-year-old pacing colt division registered historic miles of their own. 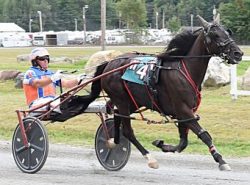 The second $17,833 division went to Deal With It Roman, who had been a dominant force in the division early in the season. He came back with determination to score in 1:59.3. Driven by Walter Case Jr. for owner/trainer/breeder Marc Tardif, the son of Western Maverick now has five wins this year. His lifetime earnings have reached $113,750. Bandolito Blaze (Heath Campbell/Valerie Grondin) finished second; Ranaldi (Cushing/Gibbs) was third.

Sunday’s lone wagering event witnessed favorite Pembroke Traveler visit the winner’s circle in the $18,389 MSBS for freshman male trotters. Driven by Heath Campbell for trainer Valerie Grondin, the son of Pembroke Slugger picked up his second victory of the season for owner Bill Varney. He paid $5.80 to win, scoring in 2:05.3. Outlawofthevalley (Switzer Jr./Tardif) finished second from the second tier post seven; Wabanaki (Davies) cut the mile, but made a costly break at the head of the stretch and hung on for third.

Monday (Sept. 19) welcomed two $17,000-plus Maine Breeders Stakes divisions for 2-year-old pacing fillies. The early non-wagering event was captured by division star Pickmepickme who picked up her sixth win in a row. Driven by Andy Harrington for the Tardif Taskforce, the handy daughter of Western Maverick was also bred and is owned by Marc Tardif. Completing the mile in 2:03.2, her next stop will be the rich final at Cumberland on Oct. 1. La Mambacita (Heath Campbell/Heidi Gibbs) finished second; Justcallmemimi (Aaron Hall/Mike Graffam) was third.

On the betting card, Katelyn’s Angel grabbed the other $17,989 division for frosh filly pacers in 2:04.4. Scoring from post five, the daughter of Western Maverick, and her driver Kevin Switzer Jr., found themselves taking in some of the fresh Maine air as the pair were parked every step of the way to win by three parts of a length over South St Dottie (Dave Ingraham/Mike Graffam). Janie (Mark Athearn/Gretchen Athearn) finished third. Katelyn’s Angel is trained by Marc Tardif for owner Leighton Property. She paid $3.40 to win and was bred by Lesley Leighton.

The Maine-bred fair racing continues Tuesday (Sept. 20) at the Franklin County oval, with two $18,000-plus MSBS divisions for 2-year-old colt pacers. There is an early post of 1:30 p.m. for the first non-wagering event.

The final stop on the Pine Tree State fair circuit is historic Fryeburg, Oct. 6–8. The Maine-sired sophomore finale returns to Bangor for all of the 3-year-old MSBS divisional finals on Oct. 15.