Home / Archived / News Headlines on Home Page / Newsroom / Four PASS titles, more than $1.2 million in purses up for grabs Saturday at The Meadows

Washington, PA — The Pennsylvania Sires Stake season for 3-year-olds ends with a flourish Saturday (Sept. 3) at Hollywood Casino at The Meadows — four $253,000 championships, four $50,000 consolations and a host of intriguing story lines.

Here’s a look at some of those colorful story lines:

Captain Cowgirl was last year’s PASS champion, and she’s performed all year as if she would repeat — until last week. In the Aug. 20 Lynch Memorial at Pocono, the daughter of Captaintreacherous-Rideintothesunset was caught outside in a brutal opening quarter and faded late. Jim King, Jr., who trains her for Jo Ann Looney-King and Kenneth Frieder, says he’s prepared to “throw that race out the window.”

Captain Cowgirl will look for a second straight PASS title at The Meadows on Saturday. Chris Gooden photo.

“She kind of faltered, so we’re starting again,” King says. “We’ve been pretty kind to her. She appreciates just being able to get out there and be herself.”

The draw also was kind to her. She’ll leave from post four with Tim Tetrick while Treacherous Dragon (Dexter Dunn), perhaps the biggest threat to a repeat, is stuck with post nine.

Captain Cowgirl’s stake season pretty much ends Saturday, and King doesn’t expect to supplement his $20,000 yearling acquisition to any of the rich late-season events. King, who has trained such top older mares as 2019 Horse of the Year Shartin N and two-time Dan Patch Award winner Lyons Sentinel, indicates he expects to bring Captain Cowgirl back next year.

“If we don’t spend any more, we’ll have enough to go back to the sales,” he says. “She’s not royally bred, doesn’t have a tremendous family, but she seems plenty sound, so we’ll bring her back next year. I don’t believe she’s a Shartin N or Lyons Sentinel, but she’ll be good enough.”

But this is no two-horse battle. Four of Saturday’s other contenders were within 2-1/4 lengths of last week’s winning pair.

Mad Max Hanover, an Always B Miki-Mayhem Seelster gelding trained by Jake Leamon for Marvin Rounick, has been installed as the 2-1 morning line favorite.

Whenever Dandy (Cantab Hall-Cocoacabana) races, his trainer, Frank Ingrassia, and owner/driver Jacquie Ingrassia, understand they’ll be getting a lot of support as underdogs. Although Frank is 89 and wife Jacquie 75, maybe they shouldn’t be considered underdogs, as they’re still succeeding at the sport’s highest levels. Besides, they don’t look at themselves as anomalies. 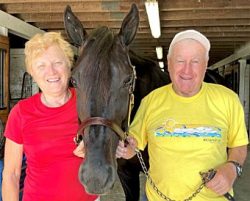 “We really don’t spend a lot of time thinking about how old we are,” Jacquie says. “That wouldn’t be very productive. At this stage in our careers, we’re having fun. We can actually enjoy this because there’s less pressure.”

The oddsmaker certainly regards Dandy as an underdog, giving him a 20-1 chance, perhaps because he leaves from post seven. But his three wins in PASS preliminary legs all were off the trot — one was DQ aided — so his post might not be such a disadvantage.

Let’s not leave this championship without a nod to S I P (Bar Hopping-Barbara Brooks), who captured last year’s title for trainer Ron Burke and owners Burke Racing Stable, Hatfield Stables, Brixton Medical Inc. and Weaver Bruscemi, but who hasn’t been as successful this year. He’s drawn post eight with Ronnie Wrenn Jr. aboard.

This championship has a wide-open look to it, so why not consider Dreamonhigh (Andover Hall-RC’s Dream), who is 7-1 on the morning line. Last year at The Meadows, she scorched a mile in 1:54, fastest ever by a 2-year-old — regardless of gender — at the track. That mark still stands.

She’s trained by Per Engblom for Zippett Racing Stable and Amos Leon Lengacher.