Honesdale, PA — The 2-year-old International Moni–Arrowstar trotting colt Action Shot equaled the all-age track trotting mark of 2:02 at the Wayne County Fair in this northeast Pennsylvania city, tying the standard set by Hambletonian champion Vivid Photo, on Wednesday (Aug. 10), devoted to 2-year-olds and proving to be a spectacular card during Honesdale’s fair meet. 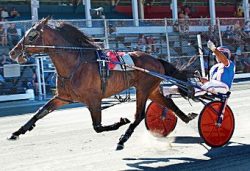 Action Shot had won twice in five starts, including a 2:04 victory at Hughesville, but to tie the all-time standard on the gait as a 2-year-old is a very special mile. And it’s interesting that trainer/driver Todd Schadel, co-owner with wife Christine and Rick and Regina Beinhauer, would equal the mark of Vivid Photo, as Todd was the co-owner of Vivid Photo with Roger Hammer. Also left behind was the previous 2:04.2 divisional standard of Toolbox Tuesday, set in 2006 with trainer/driver Hammer.

Two other local standards were rewritten on Wednesday, one on the same gait, and one by the same sex.

The Captaintreacherous–Well What’s New pacing gelding Captaincountrystar became the first freshman to go in 2:00 at Honesdale by reporting home in even time for driver Cody Schadel and trainer/father Todd, co-owner with Andy Miller Stable Inc. and Wallace Townsend Jr., rewriting the 2:01.1 of Seth Hanover.

Cody Schadel came back to turn in by far the fastest mile of the meet, and one ranking within the couple of fastest ever at Honesdale, when he won a division of the free-for-all pace with Terry A Hanover in 1:57.1, a year after that colt tied the local record for sophomores. Alastor Hanover (Hammer) set the 1:56.2 all-time pacing record over the local twicearound in 2010. Cody guided the winner for trainer/father Todd, mother/co-owner Christine Schadel, and co-owner Caitlin Solt.

Trainer Karen Fread, who sent out the horse finishing second behind Terry A Hanover, conditions the other FFA winner, Delightful Summer, whom Tony Schadel drove to a 2:03.4 triumph for Crazy Parrot Farm.

Also of note Wednesday was the victory of the Betting Line–Goldies Bad Girl pacing filly Rambling Ruby in 2:04, her eighth at the PA fairs, most of any horse, and giving her the North American outright lead for freshman pacing fillies. Trainer/driver Todd Schadel (whom we’re sure you figured out was top horseman at the meet) co-owns Rambling Ruby with Andy Miller Stable Inc., Jean Goehlen, and Bert Hochsprung.

After that display of brilliance on Wednesday, the Thursday card for 3-year-olds would have to go “the mile of its life” to come close. Buchannon Hanover, who had won all four of his previous PA Fair victories in 2:00 or less, won in 2:02 to join stablemate C-Bet Hanover (2:01.4) in sweeping the division for pacing colts.

The free-for-all trot saw Linda Schadel, usually the trainer of stable horses driven by husband Tony, take a turn in the sulky and win with SVF Cash Deposit in 2:06, just a month after the pair acquired the horse.

Honesdale Director of Racing Jeff Firmstone is to be commended for convincing his board to continue to sponsor races for the more-seasoned pacers and trotters (and a 1:57.1 mile should help his cause).

Before leaving Honesdale, we should point out that driver Branden Smith and trainer Syl King Jr. were “shorted” a victory credit in the last writeup, under bizarre circumstances: their horse crossed the wire third, but the first two finishers each were disqualified in separate incidents, boosting Team Smith/King’s money won from 12 percent to 50 percent!

And now the Pennsylvania Fair Circuit really kicks into high gear: there is racing at Arden Downs, the Washington County Fair, on Sunday at 10 a.m. and Monday at 11 a.m., with many of those horses not having to travel far to race at the Dayton Fair on Wednesday and Thursday at noon or at the Somerset County Fair on Thursday at 2 p.m. and Friday at noon. The intense stretch comes to a close at the Crawford County Fair in Meadville, where there will be racing on Saturday (Aug. 20) and Sunday (Aug. 21) at noon. We’ll have reports after every meet.