Dover, DE — KDK Standardbreds’ homebred Heinikin Bythebay put himself in position to claim a third of a possible four Delaware Standardbred Breeders’ Fund series championships with a 1:52.3 win in his $20,000 second-round preliminary split for 3-year-old male pacers on Thursday (Dec. 8) at Bally’s Dover, recording his seventh win in nine seasonal starts in the act. Bad And Boujee proved a dominant 1:53 winner in the other division.

Victor Kirby vacated the pocket with 1-5 favorite Heinikin Bythebay midway on the first turn, and the Southwind Lynx gelding cleared early leader Johnny Badlands (driven by Corey Callahan) at the end of a :28.3 first quarter. After maintaining a moderate pace to the half in :57.1, Heinkin Bythebay switched gears up the backstretch, sprinting his final sectionals in :27.4 and :27.3 on his way to a two-length win over Johnny Badlands. Cntnobdytelmenothn (Tony Morgan) made mild gains up the backstretch to finish third, another 2-1/2 lengths in arrears. 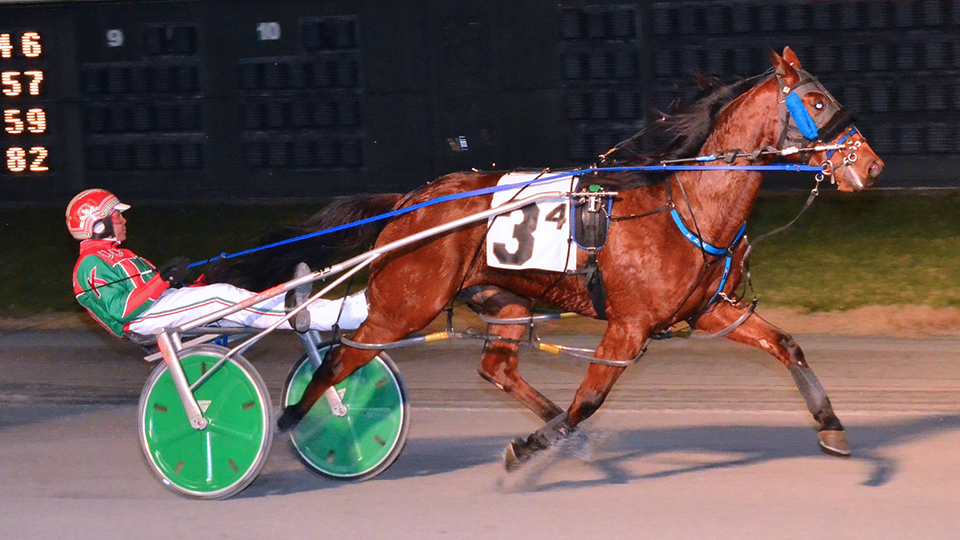 Heinikin Bythebay brewed up a 1:52.3 win in his second-round division of the DSBF series for 3-year-old male pacers on Thursday at Bally’s Dover. Fotowon photo.

After chasing Heinikin Bythebay to finish second in the first round, Bad And Boujee got back in the win column in the other second-round division — but he faced a stern test from first-round winner Ds Heartland through the far turn before powering clear.

Bad And Boujee got away third in the seven-horse field before Tony Morgan pushed forward with him to clear Ds Heartland (Art Stafford Jr.) after a :27.4 first quarter. The pair sat one-two through middle splits of :56.2 and 1:25.1 before Ds Heartland pulled the pocket and gained to within a half length on the final turn. Bad And Boujee found plenty more in the final eighth, parrying Ds Heartland and sprinting five lengths clear. It’s Above Me Now (Montrell Teague) rallied mildly from midfield for third.

Bad And Boujee, a nine-time winner for owner-trainer-breeder Eric Foster with $139,467 in lifetime earnings, paid $2.60 to win.

Qualifying for next Thursday’s (Dec. 15) $100,000 final in addition to two-time preliminary winner Heinikin Bythebay and single-leg winners Bad And Boujee and Ds Heartland are: Cntnobdytelmenothn, Johnny Badlands, Step On Over, It’s Above Me Now and Business Director.