“There’s not much to say, it was a simple win,” he remarked about his June 16 victory at the Wapello County Regional Fair in Eldon, Iowa. “I was on the outside and I just left the gate, the favorite broke, and I just stayed to the front and was the leading horse all the way around, gate to wire.”

It turns out, however, there was a little more to it, as Hochstedler and his trotter, Sparkplug Sparky, couldn’t really relax until their work was finished.

“When I heard them coming up on the three-quarter pole again on me, I had to keep going, and I really got going,” Hochstedler said. “I wasn’t looking back until I got across that wire.” 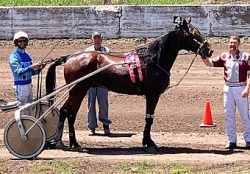 And while a first driving win is always huge, Hochstedler’s second victory in the sulky was even bigger because it was with a horse he also trains and owns. On July 16 at the Chickasaw County Fair in Nashua, Iowa, Paul got his first training victory by guiding Fuzzyduck Go N Spi to first place.

“That one was a little more competitive,” Paul said. “I tried to get off to the front. I was second behind the leading horse at the quarter pole and followed him around. At the three-quarter pole, he went too wide, so I snuck on inside of him and I went for home.

“It was kind of a funny race. Usually, you don’t pass on the inside, but it gave my horse a shorter trip. His horse broke, I’m not even sure how much we won by, but it was quite a few lengths.”

The 28-year-old admitted that win meant more than even his first, since he conditioned the horse and drove it.

“It meant a lot more,” he said. “I was more thrilled that I actually got a horse I trained to the winner’s circle with me in the seat.”

For the most part, Hochstedler is a self-made horseman. He was born in Kalona, Iowa, which is 20 miles south of Iowa City. He grew up on a farm but there was no racing involved aside from distant relatives who raced in Illinois and Indiana.

When asked if he wanted a career in horse racing, Paul said, “Yes and no. I didn’t really have any plans. I just liked horses and I just kept going.”

With the help of connections he made through his brother Ben, the two started breaking colts for owner/trainer Wilda McDanel.

“She’s been the most help through all of this,” Hochstedler said.

At that point he had planned on helping Ben part-time with farming, but the horses and the farm became too much, so he decided to drop the rake, hop off the tractor and pursue Standardbreds.

Paul and Ben bought parts of several broodmares and he owns shares of several horses that are racing.

“I’ve got five of them that I’m training myself and two of them leased out,” Hochstedler said. “I also train three for Wilda McDanel.”

“She used to train and drive for herself,” he said. “She mostly just raises the babies, then I break them. This year what we did was, we’ll break the 2-year-olds and I’ll train them for her. As 3-year-olds she’ll take them and train them down and I would help her train them as we go.”

Hochstedler got his qualifying/fair driver’s license earlier this year but is not ready to go for a provisional license just yet.

“I was focused on getting a ‘P’ license, but I don’t know if I’m good enough for that, so that’s why I haven’t just yet,” he said. “I’ll have to decide for next year. If I see I don’t have enough wins yet and I’m learning a lot of things and it’s going to take a while to learn a lot more things, I’m in no hurry for a ‘P’ license.

“I want more experience; where to place my horses, get more horses placed to the front or as close as I can. And then knowing how to finish, when to pull. Being a bit more aggressive in the race. I’m more of a laidback driver now.”

Hochstedler hasn’t gone to any one driver for advice but has been slowly learning from all of them.

“There have been times where I did mess up and they let me know, which I told them to do anyway,” he said. “And I did ask a few of them ‘How’s my driving?’ and they say it’s great, they can’t complain. But there’s a few times I messed up and they let me know. There wasn’t a certain driver I went to. We all kind of help each other. It’s kind of a cool area to race, really.”

Hochstedler hopes to both train and drive as his career builds. As a trainer, his horses have hit the board in 28 of 63 races, winning three.

In assessing what he needs to improve on, he said with a laugh, “I need to train my horses to win.”

“I’m still learning,” he added, “so I can’t really say what I need. I’m definitely not the best, put it that way. I’m probably going to be entering more horses. We’re running for decent money at the fairs and I’m training for other people, so I need to be making money also. I’m going to be entering better drivers on my horses, so they get better and next year I want to look at doing things differently as a trainer.”

His plan is to finish out this fair season, and then he already has a number of young horses to prep once the season ends.

“It’s definitely all been a handful; more than I expected,” he said. “But it’s been good so far.”