Columbus, MN — The Thursday night (July 28) program at Running Aces featured both freshman and sophomore action in the MN-sired program and drew two divisions for each event. 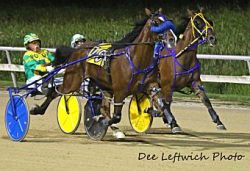 I’m A Skoldier and driver Mooney Svendsen rallied in the homestretch in the $16,500 freshman male pace. Dee Leftwich photo.

I’m A Skoldier ($3.80) and driver Mooney Svendsen rallied in the homestretch in the $16,500 freshman male pace to post a late-charging win over pacesetter Polar Storm and stablemate Kawabunga in 1:57.4 for a new career mark. The impressive son of Wind Me Up has now won two in a row and two of his three career races for owner/breeder Van Otterloo Stables and trainer Robert Lems.

Curvsreasyondaeyes is now a perfect six-for-six in 2022 after posting a gate-to-wire score in the $19,800 MN-sired sophomore ‘A’ pace with regular pilot Luke Plano in tow. Assigned the outside post in the seven horse affair, the son of Easy Again had no trouble getting to the lead immediately and he was comfortably in control throughout.

In the lane, Lovin On You (Brady Jenson) made a furious late charge at the leader and it would take a picture to determine if Curvsreasyondaeyes ($2.80) had extended his winning streak. After review of the photo, he had indeed kept his head in front for another victory. Kitty Wampus was third best in the 1:55.1 mile.

The winner is owned by his breeder Kati Sokolowski and is trained by Maria Alvarez for the Williams Hernandez stable.

The $13,200 ‘B’ division went to Perfect Force (Special Forces) for his first pari-mutuel win. Big Rusty (James Gould) made the pace and driver Jenson waited patiently with Perfect Force ($7.40) until the homestretch where they posted an impressive rally to get by the leader and score in 1:55.2 by one length over Big Rusty with Rosco P Coletrain (Mooney Svendsen) picking up third.

The winner is owned by Jason, William and Sally Ludwig and Tonja Roland-Ludwig and is trained by Dan Roland.

The freshman filly pace went to Stevies Girl ($14.20) in 2:00 for her first career win. Race favorite Fillister Photo (Chad Svendsen) and Anotherflashywoman (Dean Magee) made the pace up front while Justpoppinpickles (Chip Lackey) followed intently from third. Driver Mooney Svendsen sat patiently toward the back of the pack with Stevies Girl before launching a nice closing rally as they rounded the final turn. In the lane Stevies Girl tipped widest of all and swept by the field to impressively draw clear while the others battled for second, with Fillister Photo just holding the second spot over Anotherflashywoman and Justpoppinpickles.

The winner is by Wind Me Up and out of the top Open-level pacing mare Party Hangover Two, who was campaigned by Steve and Kathie Wiseman during her stellar racing career. The filly is named in memory of Steve and is owned by breeder Barbara Arnstine, along with Stephen Chambers and Kathie Plested-Wiseman who also trains.

The $16,500 Mares Open Handicap Pace went to Hottieonthehorizon for her fifth win in nine local starts this year. Trainer Rick Lancaster was in the bike and wasted no time in sending his stable star right to the lead from post four while Avaya Hanover (Mooney Svendsen) got away in the pocket. Hottieonthehorizon ($2.80) was always in control and dug in gamely when Avaya Hanover attacked from the pocket in the lane, posting a solid four length score in 1:54.1 over Avaya Hanover and Shesureissomething. The winner is also owned by Lancaster, as well as Leslie Godlien.