Saratoga Springs, NY — It’s been a hot stretch at Saratoga Casino Hotel for trainer Alicia Gray and driver Shawn Gray and on Monday (Sept. 19), the tandem teamed up for their second Open Pace win in the last three days at the Spa.

Their Alluneedisfaith N won the Open Pace on Saturday night on an evening that saw Shawn Gray pilot five winners. 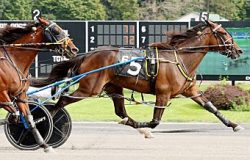 La Bella Vita N paced away from her rivals to score in 1:52.2. Melissa Simser photo.

In Monday’s matinee, the Alicia Gray-trained La Bella Vita N (Changeover) was the public’s overwhelming favorite in the wagering after the would-be favored Sea Shadows was scratched.

Shawn Gray took the 1-5 shot La Bella Vita N back in the early going in what was a field of five in the $16,000 Fillies and Mares Open. The big favorite sat patiently in a first half that went in :56.3. Gray picked up cover with his 7-year-old distaffer and in a matter of just a few strides, she put the swoop to the group, pacing away from her rivals to score in 1:52.2.

For La Bella Vita N, it was victory number eight on the season and her second in the local Fillies and Mares Open. With the earnings from Monday’s score, La Bella Vita N went over the $100,000 mark for the ’22 campaign. The New Zealand invader is owned by Bowie Racing and Michael Goldberg Racing.

Live racing resumes on Friday evening at Saratoga with some intriguing carryovers. The Pick-5, which begins in race one, has a carryover of $2,453. The Jackpot in the Pick-6 has climbed to $10,071 while the Super High Five Jackpot in the evening’s finale will carry $3,611.