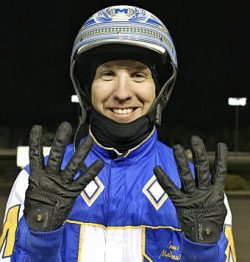 MacDonald entered Monday’s card with 372 wins on the season at Mohawk Park, 106 more than his nearest rival. Woodbine’s leading driver took advantage of his horsepower, guiding six post-time favorites to victory throughout the evening.

A native of Prince Edward Island and current resident of Guelph, Ontario, MacDonald’s two most notable victories on the card came in the Preferred Trot (Locatelli) and Pop Up Series Final (Never Mind N).

The victory with Locatelli also brought the need for an addition to the record book, as the 4-year-old gelding won in 1:50.4, matching the older trotting horse track record.

MacDonald’s eight victories are listed below:

MacDonald also had a fifth and third-place finish in two other drives Monday.

The favorite to repeat as Canada’s Driver of the Year at the O’Brien Awards, MacDonald leads the nation with 429 victories and is nearing C$10 million in earnings for the 2022 season.