Cumberland, ME — Three divisions of 3-year-old pacers competed over the weekend at Fryeburg Fair, looking for their places in the lucrative $240,000-plus Maine Breeders Stakes sophomore finals on Oct. 15 at Bangor. 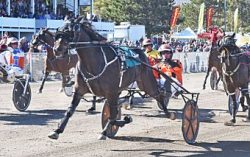 Scoring from post four, driver Heath Campbell set out for the front end, but had to take in some of that good Pine Tree State air through a :28.3 opening panel where Deal With It Roman (Walter Case Jr./Marc Tardif) had attained the lead.

Once the field passed the stands in a :57.4 half, the Valerie Grondin-trained son of Western Maverick had passed all his foes and was ‘large and in charge’ on the front end. Deal With It Roman came right back out and got hung while Ugotaearnyrstripes (Dave Ingraham/Steve LaCasse) was second over into a 1:29 third panel breather.

Bandolito Blaze paid $8.60 to win. Owned and bred by Valerie Grondin with co-owner Rhoda Underhill, it was the fourth seasonal victory for Bandolito Blaze who goes into next week’s $60,000-plus final as one of the favorites. With the Fryeburg triumph the colt now jumps to the top of the heap, sporting the most points in the glamour boys division.

Wolverina continued her reign of terror, clawing her way to another wire-to-wire romp in 1:57. A winner of 11 races in 13 seasonal starts, the daughter of Cheyenne Hollywood raced back in just five days after her 1:53.2 score at Plainridge in a Massachusetts Sires Stakes race. Wolverina paid $2.80 to win. Pembroke Legacy (Campbell/Grondin) finished second; Cowgirl Rides Away (Shawn Thayer/James Smallwood) was third.

Bred, trained and co-owned by Mike Graffam with Bill Arnold, and driven to victory by Nick Graffam, she has earned $122,250 this year. Wolverina has only Pembroke Legacy in her path to a clean sweep of the final. Both fillies are neck-and-neck in the point standings, which should lead to a very exciting $60,000-plus divisional final.