Trenton, NJ — The one thing an owner or trainer probably won’t have to worry about when Hunter Myers is driving their horse, is having a cocky guy who thinks he knows too much.

“If you think you learned it all then, I’m sorry…that’s no good,” figures the son of trainer Mike Myers.

It is said one often learns more from losing than winning. That wasn’t the case for Myers last season. He won a lot, but his quest for harness knowledge continued throughout a career year.

“I think you just learn how to handle yourself more professionally and you know how to drive better in a certain situation,” said Hunter, who turns 25 on Feb. 16. “It might not sound like much, but the more you drive, the more situations you get into of some sort. 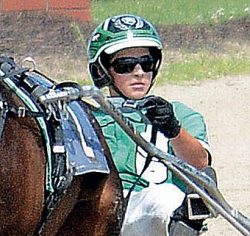 “It’s all part of a learning experience. You might get into the same situation again, but you can handle it differently without having to take much effort to figure out what to do. You can do it in a quick second.”

Myers was a finalist for the 2022 Dan Patch Rising Star Award after enjoying career highs in starts (3,233), wins (464) and earnings ($4.45 million). He finished seventh in North America in wins. His 190 firsts at The Meadows in Pennsylvania placed him third behind veterans Dave Palone and Aaron Merriman, and his 271 wins at Ohio’s Northfield Park were fifth behind Merriman, Ronnie Wrenn Jr., Billy Davis Jr., and Chris Lems.

“Last year was by far the best,” Myers said. “A lot of great things happened last year; racing was good. I got to win some stake races in Pennsylvania. That was my goal — to win a stake race in PA (after winning state-restricted stakes in Ohio the prior year). It’s all been very positive.”

Myers noted the reason for his success was better horses, and the fact he changed his style somewhat and drove a little more aggressively. He has steady clients in Andy Rickert, Sam Schillaci, and his father. With his continued success, Hunter is drawing interest.

“I’ve had a couple trainers I pretty much stick with,” he said. “Some trainers that have used me before, especially at The Meadows, they’ve come back and put me back down on their horses to drive. I also got the chance to drive for Jimmy King last year, and that was very good. I got to drive a couple of very nice horses from him.”

The lifelong Ohio resident, now living in the Cleveland suburbs, has been around the sport all his life. He began driving in 2014 when, at age 16, he made 110 starts at 29 different tracks and won 19 times on the Ohio fairs circuit. A year later he won 55 of 272 starts at 38 tracks, finishing No. 5 in fair wins.

“(My goal) was probably always to be in the business,” Myers said. “Starting out I had some other back-up plans if something fell through. I went to school to be a diesel mechanic and stuff like that. But once I got into it fulltime, I stuck with it. Going out there, going into the first turn or being bunched up in the last turn, it’s always a rush. It’s something I always liked.”

And while he is happy to have accomplished trainers to drive for, Hunter also enjoys helping out the “little guys” in the business.

“There’s one guy I drive for in Northfield,” he said. “He’s an older gentleman, he’s got one horse, it’s a nice little horse. He wins, he’s happy. So, it’s always nice to have someone in a small stable do something good, and see how happy they are. It’s always a nice feeling to help them do it.”

A sign of Myers’ success is the way his drives have steadily increased over the past four years, going from over 1,600 to 1,900 to 2,900 to 3,200. He is becoming sought after and loves the action; but admits to needing a day off.

“It kind of wears you out a little bit,” he said. “But I don’t mind the steady flow of work. And you have your days you can take off. I have at least one day that I have off and I try to catch up on relaxing and stuff. Some days I run errands, mostly I just kind of putz around at home. I try not to do much.”

“This year’s not too bad,” he said. “It started off a little slow, but it’s a marathon, not a sprint.”

In looking at his career to date, Myers cannot complain. He already has over 1,500 wins and $12 million in purses.

“I’d say I’m doing pretty good for where I’m at,” he said. “I wouldn’t say I’d want more, but I wouldn’t say I would want less. It’s kind of fallen in order pretty nicely. Every year I just tell myself I want to get better than last year. I’m sure there’s something more to come, but I just take it year by year.”

He is taking the same outlook on his career planning. For now, he is content on staying where he’s at “unless something crazy happens.”

“I’m open to do a little traveling if I have to, but mainly just Northfield and The Meadows this year,” he said. “Long-term I’d like to see just where it goes. I’ll let it travel at its own pace. I don’t feel like trying to push myself into situations, but if something came and it was an opportunity then I’d be for sure hopping right on it and go.”

One thing is certain, wherever he goes he will always have the support of the man who taught him the sport at a young age. Mike Myers is still training but finds time to follow his son’s exploits.

“He might not show it out in public, but especially at home, he’s the number one fan,” Myers said.

And although Hunter did not win the Rising Star Award, which went to trainer Lucas Wallin, he was happy just to be nominated.

“It’s a great thing,” he said. “Winning or not, it’s still nice that all the people in harness racing at least noticed and have seen the stuff I’ve accomplished. It’s not like you’re somebody that’s just driving. You’re somebody that somebody else is paying attention to.”