Dover, DE — Art Stafford Jr. and Wyatt Starkey’s Navy Blue lived up to 1-20 favoritism for the second consecutive week in the Delaware Standardbred Breeders’ Fund series for 3-year-old male trotters at Bally’s Dover, posting a comfortable 1:58.4 win in his $20,000 second-round division on a rainy Tuesday (Dec. 6).

Stafford, who also trains and drove the Anders Bluestone-Overnight Hit gelding, took his time in the early stages, allowing Snow Burst (driven by Allan Davis) and Wolfpack Russ (Corey Callahan) to duel before brushing Navy Blue from third and clearing for the lead just past a :29 quarter. From that point, Navy Blue faced nary a challenge, coasting through middle splits of :59.1 and 1:29.1 and opening up a five-length lead on the final turn. Stafford then took Navy Blue in hand through the stretch to win by a geared-down 1-1/2 lengths over Snow Burst. Sunset Sail (Tony Morgan) improved gradually up the backstretch to take third. 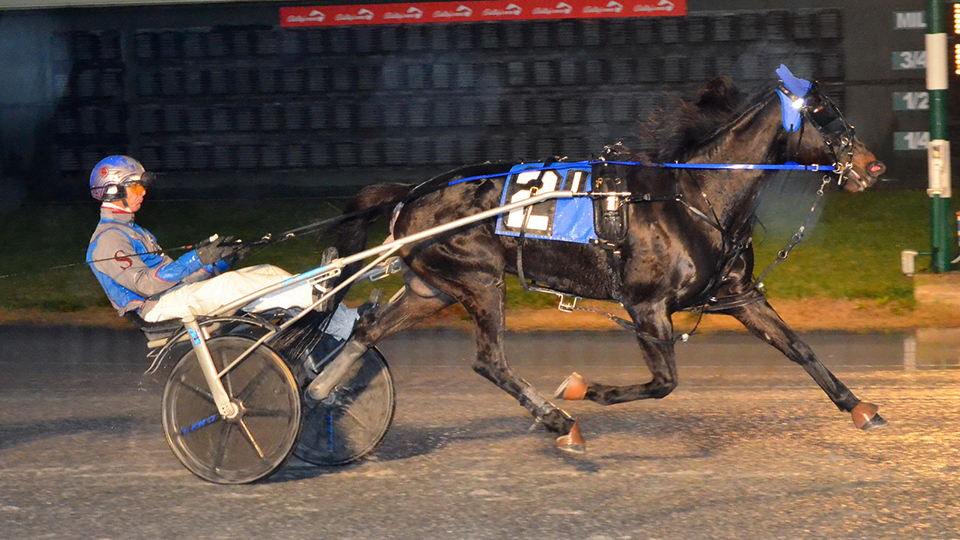 Navy Blue withstood the elements in victory in his DSBF second-round split on Tuesday at Bally’s Dover. Fotowon photo.

The other division winner, Big Daddy D, also won in 1:58.4 off a third-to-first move, but it took the Dusty Winner-Do We Lindy gelding and driver Cody Poliseno much longer to clear the lead after grinding first-over through a :57.1 half before wearing down and clearing Embrace The Stone (Tim Tetrick) midway up the backstretch. Despite slowing considerably in the stretch, Big Daddy D held his ground to stave off a wide rally from Tua (Montrell Teague) by three-quarters of a length. LG’s Reed O Wen (Jim Morand) preserved third after losing cover nearing the far turn.