Grove City, OH – It was a cold and snowy Saturday night (Nov. 19) in Dayton, but Ohio horsemen warmed the coffers of 20 charities as part of the Ohio Harness Horsemen’s Association Second annual charity night.

Josh Sutton was the hero of the evening as he drove both winners, netting the Gala of Hope and With God’s Grace Mobile Food Panty each $10,000.  Both charities were big winners in last year’s event but needed photo finishes to claim this year’s top donations 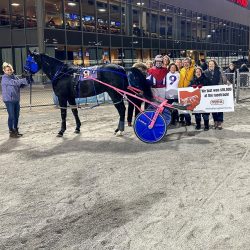 Gala of Hope Foundation celebrate winning a $10,000 donation from the Ohio Harness Horsemen’s Association with the help of Josh Sutton and Robert Again. OHHA Photo.

In the first charity race, Robert Again with Sutton was eighth at the top of the stretch but roared home to the delight of the Gala of Hope charity cheering him on from the winner’s circle.  Modern AS was second in the photo for Hannah’s Treasure Chest.  Third place went to the Miami Valley Down Syndrome Association.  The other charities represented in the race were: Dayton Unit NAACP, Dayton VA Medical Center, Honor Flight, Ohio’s Hospice of Dayton, Pink Ribbon Girls, Shoes 4 Shoeless, and United Rehabilitation Services, 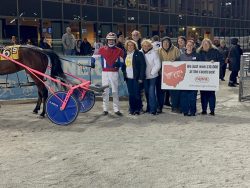 In the second charity race of the night, Sutton and Mustang Beach representing With God’s Grace Mobile Food Pantry held off a hard charge from Frequent Image representing the Marine Corp Toys For Tots to win in a photo.  Topville Rustler finished third for The Food Bank.  The other charities represented in the race were:  4 Paws for Ability, Artemis Center, Dayton Warriors Softball, Fisher/Nightingale Houses, For Love of Children, Ronald McDonald House, and Shriner’s Children.

A total of $64,000 was donated to the charities by the Ohio Harness Horsemen’s Association.

The Ohio Harness Horsemen’s Association (OHHA) is a non-profit organization serving Standardbred horse owners, breeders, trainers, drivers, and fans who participate in the sport of harness racing in the Buckeye State.

OHHA was founded in 1953. The mission of the Ohio Harness Horsemen’s Association is to preserve, protect, promote, and serve the entire Standardbred industry in Ohio and beyond.