ANDERSON, Ind. – Indiana Sire Stakes action continued on Wednesday (Sept. 14) at Harrah’s Hoosier Park, this time with the freshman pacing fillies stepping into the spotlight. Two divisions of the fifth leg of Indiana Sire Stakes action for the pacing fillies highlighted the 14-race card, with sire JK Endofanera once again completing the stakes sweep of the division.

The $68,000 first division kicked off the stakes action with Queen’s Reign backing up her leg four victory in her last outing. With driver Michael Oosting aboard, Queen’s Reign left alertly from post five, crossing over quickly to the lead to open things up with a :26.3 opening panel. Queen’s Reign would relinquish the lead up the backstretch as Sleazy Mama and Trace Tetrick popped the pocket to lead the field to the halfway station in :56.2. Sleazy Mama and Tetrick maintained command on the far turn to lead at three-quarters in 1:25 as her stablemate and heavily favored Beauty N Grace made an uncharacteristic miscue while attempting to move first over, leaving a revved-up Queen’s Reign and Oosting ready to strike from the pocket. 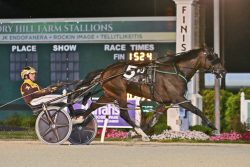 In the stretch, Queen’s Reign popped the pocket with authority, motoring home with a :27.2 final fraction to open up and score by over two lengths at the line in a lifetime-best 1:52:4. Polks Image and Peter Wrenn rallied up the rail to finish second with Feetmadefordancin and Dale Hiteman getting up for the third position.

Trained by Ernie Gaskin, Queen’s Reign picked up her second career victory in nine outings, having now gone back-to-back for owner and breeder, Watermark Farm LLC. With the victory, the daughter of JK Endofanera out of the Riverboat King mare, Queen’s Gold, pushes her lifetime earnings to $96,250.

The $68,500 second division immediately followed in the 11th race of the evening, this time with the unbeaten Rollin Rosie maintaining her flawless record. Getting away from post seven in the field of eight, driver Jordan Ross left aggressively, striking the front end to the tune of a :26.1 opening quarter. A parked-out Plan To Tell and Jimmy Whittemore proceeded to push to the front end up the backstretch, before immediately facing pressure from JKs Lucky Lou and Tetrick through a brisk half of :54. JKs Lucky Lou cleared heading into the final turn as Jordan Ross would launch Rollin Rosie once more from third engaging the leader at three-quarters in 1:23.

The two race favorites would slug it out from there down there stretch, with Rollin Rosie eventually wearing down a gutsy JKs Lucky Lou with a :28.2 final quarter to score the victory in 1:51.3 by three-quarters of a length. Always In Flight and John De Long would rally for third to round out the trifecta.

Now a perfect five-for-five in her young career, Rollin Rosie has now banked $145,250 for trainer Tyler George, who co-owns the filly along with Scp Stable and Gregory Samples. Bred by Mahlon Lambright, Rollin Rosie is sired by JK Endofanera and out of the Rockroll Hanover mare, Rock N Roll Baby, making her a full-sister to 3-year-old Indiana standout JK’s Rollin Baby.

Racing action continues on Thursday (Sept. 15) at Harrah’s Hoosier Park with a 14-race card featuring both divisions of 3-year-old trotters in Indiana Sire Stakes action. Thursday nights at Harrah’s Hoosier Park also feature a $10,000 guarantee in the Early Pick Four in races 3-6 as well as a $10,000 guaranteed Hoosier High Five in the evening’s final race. For more information on the 2022 live racing season, guests are encouraged to visit www.harrahshoosierpark.com.