Hightstown, NJ — When Crystal Serra stumbled upon a yearling pacer out of Bold Wench for private sale at a Michigan horse auction in 2009, she had to have him. Her aunt and uncle, Jean and Tom Clark, had trained several horses out of the mare and Crystal in the past had tried, unsuccessfully, to buy Bold Wench as well as her previous foal Bolder.

This time, though, with assistance from trainer Kelly Goodwin, for whom Crystal worked while in college, she was able to broker a deal for $1,500 to buy the yearling. He was the first horse she ever purchased, and she named him Bold Decision. In the ensuing 13 years, he took her on a journey she never expected. 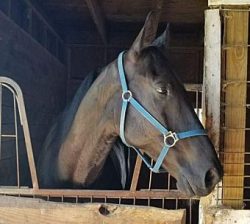 Bold Decision, a son of stallion Cheyenne Rei, has hit the board in 151 of 349 career starts, winning 55. Photo courtesy of Crystal Terrell.

Bold Decision, a son of stallion Cheyenne Rei, has hit the board in 151 of 349 career starts, winning 55, as he heads toward the end of his racing career. The 14-year-old faces mandatory retirement when the calendar turns to 2023, but not before Crystal, now married with the last name Terrell, enjoys seeing him compete at least once more at Northville Downs in Michigan.

“Most little girls dream of owning a horse,” Crystal said. “I was still that horse crazy little girl (in 2009). I’m blessed to have come upon him. I didn’t know he was going to be at the sale and here we were pulling money out of an ATM at the pavilion in East Lansing to put a down payment on a horse we didn’t expect to find. It was serendipitous.

“I know that when we bought him, no one thought he was going to do what he’s done. We had offers when he was 4 and 5 from people wanting to buy him, but the silly little girl in me couldn’t let him go. I couldn’t sell him. He was a huge part, and still is a huge part, of my life and everyone that’s been involved with him. Everybody enjoys him. He’s something else. It’s been a very cool ride. It’s hard to believe it’s over from that perspective.”

Bold Decision came within a neck of winning the Michigan Sire Stakes championship for 2-year-old male pacers, and a year later again finished second in the series final. Those were the only times he raced for more than $30,000 in his career, yet he amassed $358,505 in purses along the way.

“He’s earned all the money he’s earned the hard way, with no big races outside the Michigan stakes,” Crystal said. “You could always count on him to pick up a check. Horses don’t know how much they cost, but it’s rare to find one that you could get so cheap that goes on to do the things he’s done. He always finds a way to surprise you.”

Crystal has numerous fond memories of Bold Decision’s successes. His first of three lifetime wins at Ontario’s Woodbine Racetrack in 2013, for example, as well as capturing the final race ever at Michigan’s Hazel Park in 2014. There also was his victory in a division of the Eddie Morgan Sr./Eddie Morgan Jr. Memorial at the Miami County Fair in Ohio in 2018 with Tony Morgan in the sulky. Counting the fairs, Bold Decision won at 15 different tracks during his career. 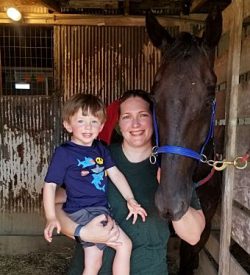 But perhaps Crystal’s top memory with Bold Decision was his first race, which resulted in his first win. It came at the county fair in Croswell, Mich., not far from where her aunt and uncle live. When she was growing up, Crystal spent time at their farm, and fell in love with horses.

“Croswell Fair is home,” Crystal said. “I was in tears. That was pretty special, pretty cool.

“When he was 2 and 3, my family went to every county fair race that he was at. He had a cheering squad.”

Bold Decision is set to race Saturday in a $5,500 conditioned race at Northville Downs. If all goes well, he will close out his career on Dec. 17 at Northville. Jennifer Main will be in the sulky for trainer Skip DeMull. Main, who began driving in 2021, got her licenses in part because of Bold Decision.

“That’s just cool to see how he’s impacted people,” Crystal said. “Jen helps Skip out. She takes care of (Bold Decision) and gets along with him. She treats him just like I would. I’m convinced that he tries harder when she’s driving. He got Jen her first win.”

Crystal and her husband Chris are expecting their second child this month. The due date is Dec. 14, although Crystal thinks it might happen a little later. So, what if the birth of her child coincides with Bold Decision’s final race?

“It would shock nobody for me to stream the races in the delivery room,” Crystal said with a laugh. “Hopefully not, but you never know.”

Following his racing career, Crystal plans to have Bold Decision trained to be a riding horse and the gelding might participate in Standardbred shows as well as serve as a breed ambassador.

“He doesn’t know what’s in store for him, but I’m sure he’ll take it all in stride,” Crystal said.