Cumberland, ME — Thursday’s (Sept. 29) two divisions of Maine Breeders Stakes for sophomore trotters were captured by the two leading stables in the Maine-sired series: Marc Tardif and Valerie Grondin.

The second race on the fifth Cumberland Fair card featured the $18,714 MSBS 3-year-old trotting colt and gelding division, with seven combatants vying for a big payday. Warriorofthevalley, who is in second place in the points standings behind Katahdin Mark, had a post position advantage and was eager to make the best of it. 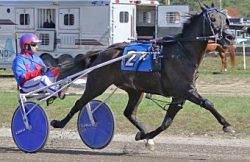 Leaving from post two, driver Andy Harrington pushed the Marc Tardif-trainee right to the front end where he controlled the tempo to his liking. Sprinting to an opening panel of :30.2, Harrington was able to back down the half to 1:03.4 and put the rest of the field to sleep. Finishing them off with a 1:00 back half, the son of Pembroke Slugger won easily in 2:03.4. Katahdin Mark (Gary Hall) finished second; Chamorro (Drew Campbell/Valerie Grondin) was third.

Warriorofthevalley picked up his fifth win of the season for owner/breeder Leighton Property. He paid $9.20 to win.

Marc Tardif, who works alongside his wife Peggy Tardif, operates the leading stable in the Maine Breeders Stakes. This season the Tardif Taskforce has amassed 35 wins and over half a million in purse earnings. Together they send nine entrants into Saturday’s (Oct. 1) MSBS freshman finals.

The first non-wagering event, off the Cumberland betting card, was the $18,511 MSBS 3-year-old filly trot and was won handily by Pembroke Faye in 2:02. Driven by Heath Campbell for trainer/partner Valerie Grondin, the daughter of Pembroke Slugger assumed command from post four and set a :31 opening panel.

At the half, Campbell let a parked out Show No Tears (John Nason) take the lead in 1:01.1. Not content to sit in the two hole, Campbell pulled the pocket and was parked at the three-quarters in 1:31.3. The division’s leading point earner, Maplewood Slugger (Andy Harrington/John Nason), grabbed that second over cover and was hot on the heels of Campbell and Pembroke Faye as the field turned for home.

Closing in on the wire, Pembroke Faye held off that late charge of Maplewood Slugger to score in 2:02 by a quarter of a length. Stablemate Pembroke Honcho (Aaron Hall) was third.

Owned and bred by Bill Varney, Pembroke Faye picked up her second win of the season and took a new lifetime mark in the process.

The driving/training team of Heath Campbell and Valerie Grondin, who are also husband and wife, are in second place in the Maine Breeders Stakes program with 29 wins and nearly $400,000 in money won.

Andy Harrington, Drew Campbell and Matt Athearn all picked up driving doubles on the card.

First Tracks Cumberland, with cooperation from the Maine Standardbred Breeders Association and the Maine Harness Horsemen’s Association, hosted a live draw of the $240,000-plus Maine Breeders Stakes for the 2-year-old divisional finals to be held on Saturday (Oct. 1). The entries can be viewed here.

Racing resumes Friday (Sept. 30). Post time is 1 p.m. for the remainder of the Fair meet, which runs through Sunday (Oct. 2).

More information can be found on our website, firsttrackscumberland.com and on our Facebook page: First Tracks Cumberland.