Columbus, OH — Test Of Faith was able to assert her dominance in the $250,000 Dayton Distaff Derby at Hollywood Gaming at Dayton Raceway on Saturday (Oct. 1). 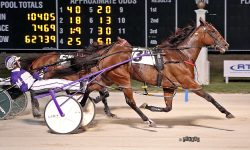 Reigning Horse of the Year Test Of Faith was confidently handled by David Miller en route to victory. Conrad Photo.

As the gate opened, Amazing Dream N (Yannick Gingras) and Gia’s Surreal (Aaron Merriman) would battle through the first eighth, but Merriman was able to guide Gia’s Surreal to the lead at the quarter in :27.2.

After a testing quarter, Gingras tipped outside and re-took the lead heading to the three-eighths pole. Heavy favorite Test Of Faith (David Miller) felt the leaders getting a breather and began her first over bid. The 2021 Horse of the Year battled with leaders past three-quarters in 1:24.1.

Amazing Dream N led the field into the stretch with Gingras urging her on, but Test Of Faith was confidently handled under a hand drive by Miller to win in 1:51.2 for trainer Brett Pelling.

Bulldog Hanover rode second over cover and had to come three-wide off the final turn to win the $250,000 Dayton Pacing Derby in 1:50.1.

There was an early skirmish for the lead, with American Courage (Matt Kakaley) making the front through a quick first quarter of :26.2. Workin Ona Mystery (Miller) was flushed out by Bulldog Hanover (Dunn), coming to the half in :54.4.

Moving up the backstretch, the outer flow pressured the leader, and past the three-quarter pole, Bulldog Hanover tipped three-wide after being parked the mile and drew off to win easily in the stretch.