Delaware, OH — After sitting behind leader Sea Silk for more than three-quarters of a mile, Treacherous Dragon and driver Dexter Dunn rallied in the stretch to win Wednesday’s (Sept. 21) $205,100 Jugette final for 3-year-old female pacers by a neck over the pacesetter in 1:51. Sweet Treasure finished third in the 52nd edition of the event, presented by Crawford Farms.

Treacherous Dragon and Sea Silk each won her $25,000 elimination earlier in the day. Sea Silk, who scored by 1-1/4 lengths over Just Divine in 1:50.1, started the final from post one while Treacherous Dragon, who won by a length over A Girl That Twirls in 1:50, started from post two.

Coming off the last turn, Dexter Dunn moved Treacherous Dragon to the outside and passed Sea Silk in the final strides. USTA/Mark Hall photo.

In the final, Sea Silk grabbed the lead heading into the first turn with Treacherous Dragon settling in second. Sea Silk led the field to the opening quarter in :27.4 and half in :56.4 before being pressured by first-over Just Divine as they headed to three-quarters in 1:23.4.

Coming off the last turn, Dunn moved Treacherous Dragon to the outside and passed Sea Silk in the final strides.

“I kind of expected that (kind of trip) when she drew the two hole,” winning trainer Nancy Takter said. “She raced super. She’s a very game filly, so if she got room, I knew she was going to go all the way to the wire.”

Said Dunn, “It was what it was. I wasn’t going to get the front around (Sea Silk), so I sat in the two hole. I was tossing out whether I was going to come out, but it was depending on when the outside flow came. It came too early for me, so we took a shot at getting some luck. She got out late coming off the last turn, but she rallied very good in the stretch.”

It was the first Jugette triumph for Takter, who also trained third-place finisher Sweet Treasure. It was the second for Dunn, who won in 2020 with Party Girl Hill. 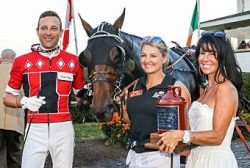 Treacherous Dragon, a daughter of Captaintreacherous-My Little Dragon, has won eight of 13 races this year for owner Hot Lead Farm. For her career, the White Birch Farm-bred filly has captured 12 of 23 starts and earned $709,863.

Sea Silk and Sweet Treasure both were supplemented to the Jugette for $15,000.

The remainder of the field, in finishing order, was Trick Of The Light, Galleria Hanover, A Girl That Twirls, Just Divine, and Wine N Dine Me.