Harrisburg, PA — Bella Bellini became the fourth female trotter this century to receive a Dan Patch Award at ages 3 and 4 when the six 2022 divisional trotting champions were announced Tuesday (Dec. 27) by the U.S. Harness Writers Association. She was the only repeat winner among this year’s trotting honorees and joined Atlanta, Ariana G, and Stroke Play as this century’s female trotters to win trophies at 3 and 4.

Pacer of the Year, Trotter of the Year, and Horse of the Year will be announced at the Dan Patch Awards, presented by Caesars Entertainment, on Feb. 19 at Rosen Shingle Creek in Orlando, Fla.

Division winners for pacers will be announced Wednesday (Dec. 28) at noon on the Harrah’s Hoosier Park YouTube channel. 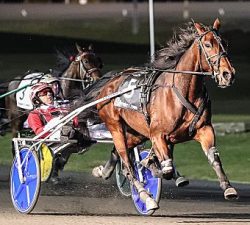 Bella Bellini, a daughter of Bar Hopping-Bella Dolce, was bred by owner David McDuffee. She was trained by Richard “Nifty” Norman and driven by Dexter Dunn.

Joviality S was the sport’s top-earning trotter in 2022, banking $1.08 million. She became the first filly to defeat the boys in the MGM Yonkers Trot since 1996, doing so with a track-record-equaling performance, and finished second in the Hambletonian Stakes.

For the year, Joviality S hit the board in 15 of 16 races, winning 11. Her other victories included the Delmonica Hanover Stakes (equaling the track record at The Downs at Mohegan Sun Pocono), the New York Sire Stakes championship, and a division of the Delvin Miller Memorial.

A daughter of Chapter Seven-Pasithea Face S, Joviality S is owned by Anders Strom’s Courant Inc. She was trained by Marcus Melander and driven by Brian Sears. 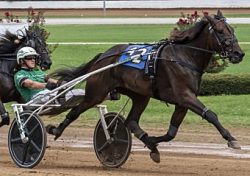 Special Way was the richest 2-year-old female trotter of the season with $697,475 in purses. Amanda Stephens photo.

Special Way was the richest 2-year-old female trotter of the season with $697,475 in purses. She won seven of nine starts and finished second once, with her victories including the Breeders Crown in a Canadian-record 1:52 and the Kentucky Championship Series final. She also won a division of the Bluegrass Stakes in 1:52 at the Red Mile.

The daughter of Walner-Special Hill was trained and driven by Svanstedt. She was bred by owners Brittany Farms, Marvin Katz, and Al Libfeld. 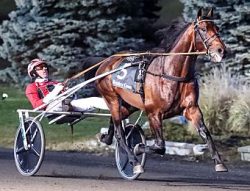 Ecurie D DK was the top-earning older male trotter of the year with $733,439 in purses. USTA/Mark Hall photo.

Ecurie D DK was the top-earning older male trotter of the year with $733,439 in purses. He hit the board in six of eight races, winning three. His victories included a world-record 1:49.1 triumph in the Arthur J. Cutler Memorial and a stakes-record-equaling 1:51 score in the Breeders Crown Open Trot. He also won the TVG Series final for male trotters.

A son of Infinitif-To Soon, Ecurie D DK was owned by Marko Kreivi Stables, Suleyman Yuksel Stables, and Ake Svanstedt Inc. He was bred by Jean Pierre Dubois and driven by Dunn and Svanstedt.

Cool Papa Bell emerged belatedly to upset at 52-1 in the 97th edition of the Hambletonian. Lisa photo.

Cool Papa Bell was the Hambletonian Stakes champion, winning at record odds of 52-1, and led all 3-year-old male trotters in purses with $893,025. In addition to capturing the Hambo, Cool Papa Bell counted the New York Sire Stakes final and Phil Langley Memorial among his six victories in 14 starts. He hit the board a total of 10 times.

Volume Eight was the fastest 2-year-old male trotter of the season, with a mark of 1:52. Lisa photo.

Volume Eight was the fastest 2-year-old male trotter of the season, with a mark of 1:52, and finished his campaign with five consecutive wins. Those victories included the Valley Victory Stakes and Kindergarten Classic Series final.

For the year, the son of Chapter Seven-Lass A Rope won seven of nine starts and earned $432,232. He was bred by Bob Key and owned by N Daley & Sjoblom Racing, Joe Sbrocco, LA Express & JAF Racing, and Mario Mazza. Noel Daley trained the colt, who was driven by Andy McCarthy.

Complete vote totals for the trotting divisions can be found here.

Room reservations for the Dan Patch Awards weekend can be made at the Rosen Shingle Creek website here. Sponsorship opportunities for the event can be procured from sponsorship chairman Shawn Wiles at swiles@rwcatskills.com. For information regarding banquet tickets, contact Judy Davis-Wilson at zoe8874@aol.com. To place an ad in the Souvenir Journal, contact Kim Rinker at Trotrink@aol.com.