Farmington, ME — In an era where the default tends to bend toward cancellation during inclement weather, the folks at Farmington Fair found a way to follow-up on their commitment to race on Thursday (Sept. 22) despite continuous waves of heavy rain pouring in over the mountains of western Maine.

The track crew worked tirelessly, utilizing skill, determination and copious amounts of material to ensure a safe, yet soggy, racing surface and the horsemen responded in kind with only one scratch requested from the entire eight race program.

The card went off without incident and in fact produced the fourth fastest clocking of the week at Farmington when Velocity Sub Z (Art’s Chip) and driver Walter Case Jr. whizzed around the wet oval in 1:58.2, one of two wins on the program for Case. 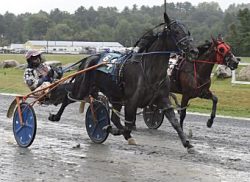 With the rains ended and the cold front passed, brisk and breezy conditions will be the order of the day for the final two sessions of the Farmington Fair. Friday’s card will be contested under sunny skies with temperatures struggling to break the 50-degree barrier. And Saturday’s card, featuring the $12,000 renewal of the Farmington Fair Invitational along with a trackside tribute to native son, Ted Wing, will continue with the sweater weather theme.

Both programs will get underway at 2 p.m. (EDT).